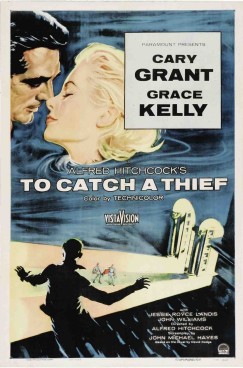 Cary Grant and Grace Kelly are a dream pairing, but when you add diamonds, burglary and the French Riviera into the mix, you suddenly have a hefty amount of glamour and intrigue.

To Catch a Thief, released in 1955 and directed by Alfred Hitchcock, sees Grant’s John Robie, a retired cat burglar, accused of a string of thefts against wealthy tourists. Kelly’s Frances Stevens, a tourist holidaying with her mother, quickly becomes enamoured with Robie and helps him as he vows to prove his innocence.

To Catch a Thief‘s opening lines aren’t words but a high-pitched scream. This is followed by another one. And then a third.

Shock suddenly turns into the wow factor, as the stunning backdrop of the French Riviera comes into view and we see Robie, aptly wearing a striped shirt reminiscent of a stereotypical burgular, admiring the view from his hilltop villa.

This is the third film that I’ve watched starring Grant and I completely understand why he has been recognised as one of classic Hollywood’s definitive leading men. In fact, I think he might be one of the greatest leading men of all time.

Grant’s charisma and comedic timing make John Robie a part he was born to play.

When Hitchcock makes a cameo appearance as a passenger on a bus Grant’s face is an absolute picture, and there are several funny quips from Robie, including: “Act as if you’re a pretty girl just out for a ride… Not that pretty — we want to get rid of him!”

Kelly’s Frances, on the hand, isn’t quite so charismatic.

This is the second film I have watched starring Kelly and I’m beginning to wonder whether she was continually typecast as ‘the young wealthy woman who thinks very highly of herself’?

Kelly delivers a fine enough performance and while there are some very amusing moments between her and Grant, it is undoubtedly Grant’s film with Kelly playing second fiddle to not only Grant but to her beautiful wardrobe as well.

Unfortunately, I did find my attention start to wander and following a decent amount of intrigue that had been built around ‘the Cat’, the finale does feel a bit lacklustre, but perhaps that is more from my perspective of watching it nearly 70 years on.

Visually it is a beautiful film but this is perhaps more of a Sunday afternoon film where you don’t need to watch every scene to still get the general meaning.

“A retired jewel thief sets out to prove his innocence after being suspected of returning to his former occupation.” – IMDb