I’m a big Sean Bean fan, and I mean big. The other night while I was looking for something at my parent’s house I came across one of my old high school homework diaries. While other girls had pictures of pop stars stuck into their diaries I had quite a different assortment: a small photo of Orlando Bloom as Legolas, a fewer larger pictures of the rugby player Jonny Wilkinson and one massive picture of Sean Bean.

Sadly, my darling Sean ‘Beanie Baby’ Bean let me down in Goldeneye. I can’t place my finger on it exactly, but this film left me wanting. I wanted Bean’s double-crossing agent Alec Trevelyan to be more sinister, and I found the reason for his treachery to be very weak. In many respects, I found the big reveal to be very anti-climatic, and that Famke Janssen’s psychopathic Xenia Onatopp was the one who really gave Bond a good fight.

If my rating was based on the strength of Brosnan’s debut, however, I would give it much more than three stars. Visually, Brosnan fills 007’s boots very well. Though in his early 40s when filming began, Brosnan brings boyish charm to the role. In some respects he is hybrid between Moore and Dalton: he throws himself into the action (Dalton) while also reciting ‘witty’ one-liners (Moore). 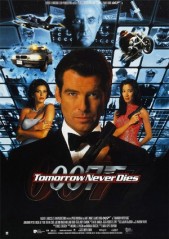 I’m not sure whether it’s because of the media-related plot – I’m a magazine journalist by trade – but I really enjoyed Tomorrow Never Dies. The plot certainly resonates in the present day, with media organisations employing underhand tactics to ensure they get the scoop…

Current order of preference: Goldfinger, Thunderball, You Only Live Twice, Licence to Kill, The Man with the Golden Gun, Dr. No, Tomorrow Never Dies, The Living Daylights, A View to a Kill, Goldeneye, Octopussy, The Spy Who Loved Me, Live and Let Die, Diamonds Are Forever, From Russia With Love, For Your Eyes Only, On Her Majesty’s Secret Service and, in last place, Moonraker.

You can read all my mini reviews and posts in my Bondathon series here.

2 thoughts on ““Tell me, James, do you still sleep with a gun under your pillow?””