Happy Monday, everyone! I hope you all had great weekends. My weekend included a visit to the BBC Good Food Festival, a trip to the cinema to see Rock of Ages and a re-watch of Tim Burton’s Alice in Wonderland. 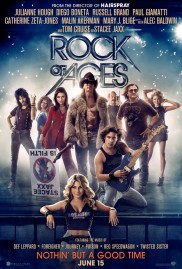 Over the last few years there has been a steady stream of musicals at the cinema, and with Les Misérables due for release at the end of the year, this trend is far from over. I’ve never really considered myself a fan of musicals – the likes of High School Musical really don’t do a lot for me – but there are several that I regularly re-watch. Mamma Mia! is one of my guilty pleasures while Labyrinth is one of my favourite films of all time.

When I saw the trailer for Rock of Ages I knew I had to see it. This wasn’t because it was a musical or because Tom Cruise would be topless. I just thought it would be a fun, light-hearted film that would make me smile.

As well as putting a smile on my face I also had a medley of Def Leppard, Whitesnake and Journey stuck in my head. Plus this fantastic track by Bon Jovi, which Tom Cruise sings when asked who Stacee Jaxx, Cruise’s famous eighties rockstar, is. Enjoy!