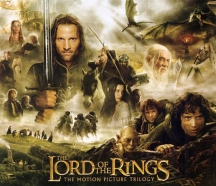 Max and I are back with another edition of Trilogy Thursday. This week we take a look at The Lord of the Rings, which features Elijah Wood as Frodo Baggins, Viggo Mortensen as Aragorn and Ian McKellen as Gandalf.

As many of you already know, The Lord of the Rings are my favourite film series. I think I saw The Fellowship of the Ring either three or four times at the cinema. It could be more, though!

Since then, watching all three films over the course of a day or a weekend has become an annual occurrence.

Claire The opening of Fellowship invites you into the glorious world of Middle-earth, which is home to all manner of fantastic races, from wizards to elves and hobbits to ents. From a rather gentle beginning where we are introduced to the world of the hobbits, the pace picks up and soon we’re accompanying the Fellowship on their quest to destroy the ring of power, a corrupt weapon created by Sauron.

After watching Fellowship I immediately started reading the books as I was dying to know what happened next. In fact, I skipped ‘The Fellowship of the Ring’ and went straight to ‘The Two Towers’! Fellowship was an excellent introduction to the The Lord of the Rings universe and I was completely hooked. The scenery took my breath away – I’ve been saving for a ticket to New Zealand ever since.

Max Frodo Baggins lives an insular life. While he loves the adventures of his Uncle Bilbo and the wizard Gandolf, he never imagines that adventure would find him in the shire. Then one day his uncle’s prized procession, his golden ring, gets passed to Frodo and begins a tireless journey to secure the safety of the entire world. Fellowship of the Ring is the beginning of one of the best trilogies of all time and it helps that this chapter is the strongest. It’s able to focus on a single storyline since the characters are in a fellowship for most of the film. There’s also the dramatic death of one of the fellowship that had me shocked. I had never read the books, so everything was new to me.

I only decided to see the film on opening night due to the buzz. I had been disappointed by too many fantasy movies in the past. This film changed all that and proved that fantasy could be done right if it was the hands of a capable and loving director. I’m not certain any other director could’ve brought this vision to the big screen other than Peter Jackson. He put everything into this trilogy and shows because the work before it and after it hasn’t come close to approaching this story.

Claire The Two Towers picks up right where Fellowship left off, and the split story telling really comes into its own. The Fellowship has become separated and we now see the quest through several people’s eyes. Aragorn, Legolas and Gimli are together and on the hunt for the kidnapped hobbits, Merry and Pippin, while Frodo and Sam edge ever closer to Mordor.

As we are introduced to more characters, namely King Théoden, Éomer, Éoywn and Faramir, I became even more in awe of JRR Tolkien’s rich Middle-earth and Peter Jackson’s fantastic interpretation. After reading the books I knew what would happen, but seeing it on screen was every bit as awesome as I expected. I don’t use the term ‘awesome’ lightly either – the battle of Helm’s Deep is one of the finest battle sequences ever captured on screen, and a shiver runs over me whenever I watch it or hear the music played during the scenes.

Max Frodo and Sam continue their journey to destroy the one ring in the heart of Mount Doom. Now joined by one of the most impressive CG companions in Gollum, their bond will be called into question as the perilous quest continues. The fellowship has disbanded and the other hobbits, humans, elves, and dwarfs must unite to fight the enemy. The Two Towers has the unfortunate task of being the middle chapter. While some trilogies have proven that the second film can be the strongest, it was already determined that The Two Towers would neither have a beginning nor an end. What I remember most from The Two Towers is of course the siege on Helm’s Deep. The scope of the battle had never been seen before as thousands of computer generated characters raided the stronghold. It also features the return of a character that was thought to be loss from the earlier chapter. The Two Towers was amazingly able to replicate the strong storytelling and pace of the original, without sacrificing much.

Claire The quest reaches its epic conclusion and evil has, once again, been destroyed. The lives of several characters are changed forever and, for some, it will not be as easy to adapt to their previous lives. Our heroes, particularly the hobbits, have experienced something utterly life changing. We experience yet more of JRR Tolkien’s mysterious and magical world, and the true horror of Mordor is revealed.

As I said earlier, the battle for Helm’s Deep is incredibly atmospheric. Though I don’t feel the same high emotion as when I watch Helm’s Deep, the final battle in Return is pretty spectacular. Helm’s Deep has every key ingredient to get your heart racing: it’s the classic David vs Goliath tale that takes place over a dark night drenched in rain. Return on the other hand offers all the bizarre creatures that Middle-earth has to offer, from the gigantic oliphant to the hideous flying fell beasts.

Max The finale of The Lord of the Rings saga has always been questioned for having one too many endings. While it was written that way in the book, maybe it didn’t work right for the theatrical version of the film. Part of me thinks they could’ve been left on the cutting room floor until the Extended cuts came out. That being said… Return of the King follows the end of Frodo’s adventure to destroy the one ring. Some of the material from The Two Towers was moved over for to this film and it plays better because of it. Otherwise the audience would be waiting for the epic fight sequences that occur 2/3’s into the film for some action. At the heart of The Lord of the Rings is determination and friendship. Those are the elements that help defeat the evil that plagues Middle-Earth.

Claire Though it is incredibly hard to choose, my order of preference would be 2, 1, 3. The Two Towers features some of my favourite scenes and favourite characters. I remember seeing Rohan for the first time and thinking how beautiful it looked. The music that accompanies it – a very poignant sounding fiddle – adds to this medieval ambience and, though an elf at heart, I would love to live there.

The Lord of the Rings trilogy deserved every Oscar that it was nominated for. It is a visual masterpiece that is pure escapism, and I adore it.

Max I’m not going to shy away from the reality here. The Lord of the Rings is one of the finest movie trilogies ever made. While the second and third parts have their points of weakness, all three movies are incredible. The Fellowship of the Ring is my favorite film of the franchise and one of the only films I’ve seen in theaters three times during its theatrical run. For the record I believe both the theatrical and extended versions of the films have their merits. While some scenes should never have been cut, sometimes the shorter run time helps the flow of the films. It goes without saying that if you haven’t watched and fallen in love with The Lord of the Rings, what are you waiting for?

Films featured in the Trilogy Thursday series so far: