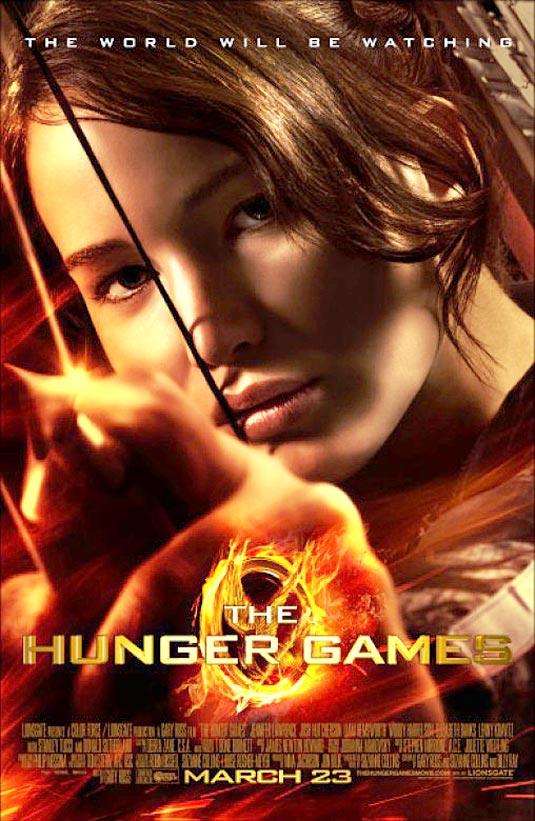 Jennifer Lawrence is hot property at the moment. Very, very hot property. From her Oscar-nominated performance as Ree Dolly in 2010’s Winter’s Bone to her portrayal of the young Mystique in X-Men: First Class, I can practically feel the heat from this rising star here in the UK.

I saw Winter’s Bone about a year after it was released. Best summed up as a gritty drama, in the film Lawrence portrays a young woman fighting to protect her family after her bail-skipping father uses their family home to secure his bond. Lawrence is, quite simply, outstanding in the role. She portrays both the fragility of the 17-year-old Ree and her utter determination to keep her family safe.

There is more than a hint of Ree in Lawrence’s latest kick-ass heroine, the bow-wielding Katniss Everdeen.

I came to The Hunger Games knowing very little about it. I knew that it was adapted from a book and that it was set in a future version of North America where ‘tributes’ are randomly selected to fight to the death in an annual event known as ‘The Hunger Games’.

Knowing little about it didn’t hinder my enjoyment. Not one bit. In fact, I’m itching to go see it again.

I’m going to borrow a few lines from Olly Richards, who reviewed it for Empire magazine: “The world of Panem, a futuristic America, is established elegantly in about 90 seconds. First we see two men discussing an event called The Hunger Games in front of an audience… Then, with a literal scream, we cut to District 12, where all is grey and people dress like the cast of a regional stage production of Little House On The Prairie. This is how Panem is divided. There are the haves and the have-nots.”

Like Richards said, the background to this barbaric event is established very quickly. Within a few scenes you become aware that this future version of North America is far from ideal.

Bubbling beneath Panem’s polished veneer is tension and unrest, though there is no uniting voice. The twelve districts, which each specialise in a different field, approach The Hunger Games differently. Katniss is from District 12, the poorest district. Only two tributes from District 12 have won in its 74-year history.

The event itself takes place in an arena overseen by the Gamemakers, behind-the-scenes staff who must ensure that the viewers are kept entertained.

It is a cruel and violent event but, through a variety of camera techniques, we don’t see a huge amount of blood and gore. In my opinion, it is just enough. I don’t want OTT violence to overshadow the characters.

I was late to The Hunger Games party but I’m very glad that I finally got on board. For me, every minute was compulsive viewing, and this is partly due to Lawrence’s stunning performance: she was a brilliant casting decision. Katniss is a determined, strong individual but still very human. She knows her limitations and so plays to her strengths. Lawrence portrays this perfectly, and Katniss is a very likable heroine.

8 thoughts on “[Review] The Hunger Games”