Happy Friday, everyone. As I’ve been a bit slack with posts this week, this post is a bumper Friday special, featuring not only a Favourites Friday but a mini review and an update from the set of The Hobbit. Enjoy!

Quint over at Ain’t It Cool News has posted his fourth report from the set of The Hobbit, this time from a brand new location. He is now reporting from a small town called Te Kuiti, which will represent Trollshaw, where Bilbo and the Dwarves run into the Stone Trolls. According to Quint, that scene has already been shot on stage, but they needed some real, beautiful jungle for a few scenes afterwards.

Read Quint’s report for insider information about Tall Paul, a 7ft New Zealander who doubles for Gandalf, plus what will happen in the Trollshaw scene and an appearance from a certain Radagast the Brown. 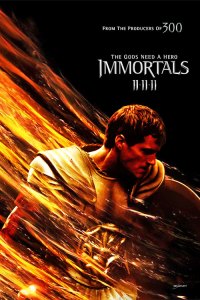 IMDb: “Theseus is a mortal man chosen by Zeus to lead the fight against the ruthless King Hyperion, who is on a rampage across Greece to obtain a weapon that can destroy humanity.”

Featuring an impressive line up including John Hurt, Mickey Rourke, Stephen Dorff and the upcoming Superman himself, Immortals does have a lot going it is favour. It’s also the third film – and first in five years – from Tarsem Singh, the man behind the upcoming Mirror Mirror.

With a tagline saying ‘from the producers of 300‘, comparisons with Zack Snyder’s 2006 film are hard to avoid. For me, 300 is undoubtedly the better film. Immortals is great fun, though, and Ruth over at Flix Chatter did sum it up perfectly when she said that it is “more style than substance”.

While it does look fantastic, I felt it was a little too stylised, if that’s possible. While 300 was stylish, Immortals seems too modern, and I didn’t like the random archway on the roof top by the entrance to Mount Tartarus. It has a very weak script, too. Frieda Pinto’s Phaedra is, like Pinto was in Rise of the Planet of the Apes, forgettable. I would have preferred more time spent with the Gods, to be honest. Luke Evans’ Zeus was intriguing but, unfortunately, he wasn’t in it enough.

As Ruth said, Immortals is, in a nutshell, more style than substance.

Leading on from Tuesday’s post about my Top 10 Movie Dads, this week’s Favourites Friday had to be Taken.

IMDb: “A former spy relies on his old skills to save his estranged daughter, who has been forced into the slave trade.”

I could go into great detail as to why I like this film so much but instead I’m going to keep it short and sweet:

Taken is, in my opinion, Neeson’s best film of recent years, and he was perfectly cast as Bryan Mills, the man on a mission to rescue his daughter from kidnappers. Visually he suits the part very well: his stature – he’s around 6ft 4 – and the fact that he doesn’t have pretty boy looks, like Brad Pitt and Tom Cruise, makes his performance all the more believeable. The wardrobe did a great job with his plain, dark clothes as well.

His performance is backed up by a well-written, fast-paced script – the film is just over 1hr 30 but doesn’t feel rushed – and fantastic baddies. The Albanian gang of human traffickers are a truly horrible bunch and, again, look like they could do real damage, and I’m not talking Jason Statham OTT damage either.

Though not everyone’s cup of tea – it does hold a slightly poor 58% on Rotten Tomatoes – Taken is a slick, contemporary thriller that doesn’t get old even after several viewings.

8 thoughts on “Bumper post: The Hobbit, Immortals and a Favourites Friday”