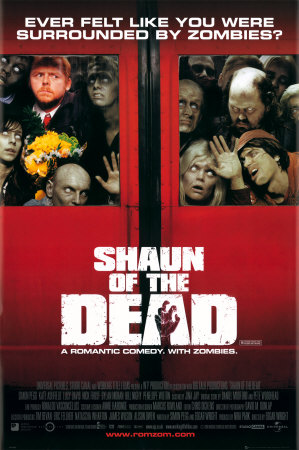 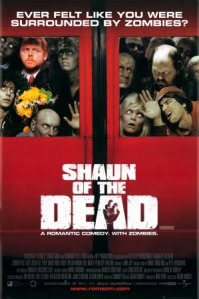 IMDb: ” A man (Simon Pegg) decides to turn his moribund life around by winning back his ex-girlfriend, reconciling his relationship with his mother, and dealing with an entire community that has returned from the dead to eat the living.”

There is much to enjoy about this film. Pegg and Frost are a fantastic double act as Shaun and Ed, and their motley crew of survivors are brilliant. It’s a zombie flick for the average man: would this film have worked with Brad Pitt and Matt Damon in Pegg and Frost’s roles? I don’t think so. Pegg and Frost aren’t your stereotypical action heroes, and that’s what makes this film so brilliant.

I’m sure it’s something that we’ve all jokingly talked about before: what would you do if zombies attacked? Castor over at Anomalous Material recently posted Zombie Apocalypse: What Would You Do? My choice would be to go to a castle or stately home. They’re normally full of weapons and have been standing for decades. Shaun and Ed’s plan? Pick up Shaun’s mum, go get his ex-girlfriend and then go to The Winchester, their local pub, and wait till it all blows over. Sounds a good plan, right?

Shaun of the Dead is a well-written, exciting film that showcases Pegg, Frost and co perfectly. To be honest, what could be more British than going to a pub? Well, perhaps going to the pub and drinking tea!