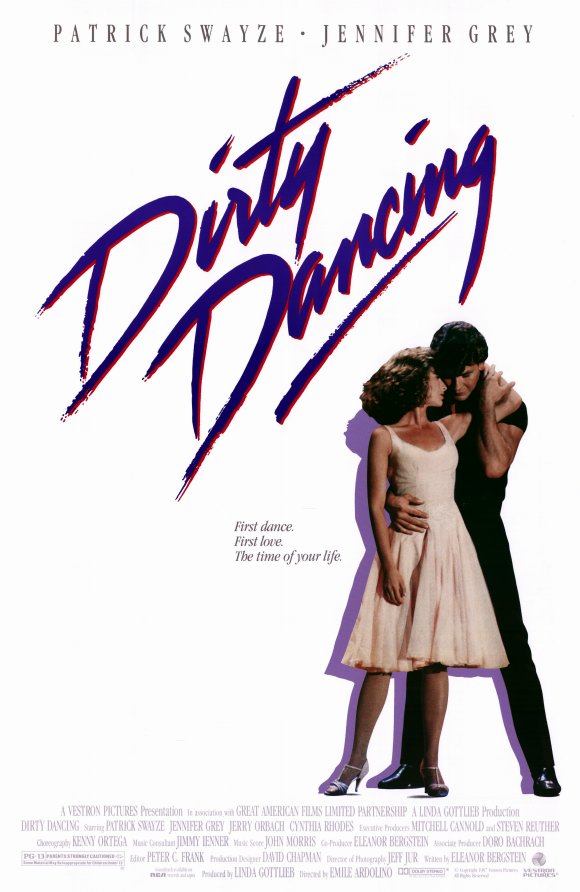 Following on from last time’s Favourites Friday post on Footloose, I’m going to carry on the dancing theme. This month’s post, on Dirty Dancing, is dedicated to my grandmother, More Nan, who passed away last night, aged 87. For many years she used to go ballroom dancing – up until about five or so years ago she was still dancing. Her claim to fame was once having a dancing with Richard Attenborough!

The film is about Frances ‘Baby’ Houseman, and the summer spent with her family vacationing at Kellerman’s, in 1963. She knows exactly what she wants to do with her life: after attending Mount Holyoke College to study economics of underdeveloped countries she plans to join the Peace Corps.

After being invited to one of the secret after-hours parties held by the entertainment staff, Baby observes a different, sexier, kind of dancing, led by the resort’s dance instructor, Johnny Castle.

On finding out that Johnny’s dance partner, Penny, is pregnant, Baby suggests that she takes Penny’s place in the annual dance that Johnny and Penny take part in at a nearby resort. To get Baby up to Penny’s standard is going to take a lot of work. Cue a lot of practice, and a lot of tension and romance.

I can’t give just the one reason why I love Dirty Dancing so much, there’s many, many reasons why I do. I love the dancing, the music and the fact that is isn’t ‘soppy’ romance. And, of course, Patrick Swayze is wonderful as Johnny.

Dirty Dancing is quite a girly film but it’s a wonderful, feel good flick with a great soundtrack that will have your foot tapping long before the end credits start to roll.