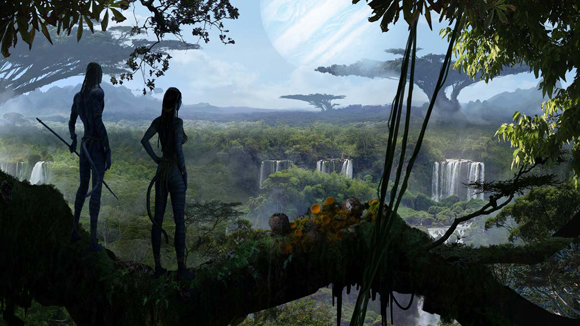 I’ve been thinking about doing a top 10 for a while — top 10 comic book adaptations, top 10 film baddies, top 10 mythical creatures — and now I’ve decided on my very first one.

One of the things I love about watching movies is that they are a window to something unusual, something out of the ordinary, something extraordinary. Much like a book can stimulate your imagination, a film can transport you to a world more mysterious and spectacular than you thought possible.

Sometimes these exciting worlds are something quite ordinary which has been jazzed up a bit. The pretty village of Shere in Surrey was enhanced by Snow Business to create an idyllic English hideaway for Cameron Diaz in The Holiday while the town of Stamford in Lincolnshire was transformed into the village of Meryton for Pride & Prejudice.

For the likes of James Cameron’s Pandora, however, the building blocks aren’t already there and it is the job of the art direction team, the cinematography team and the visual effects team to create something truly special and believable.

10. Charlie and the Chocolate Factory – Willy Wonka’s Chocolate Factory
I wouldn’t go as far as to say that I’m a chocaholic but I am partial to the odd piece now and again. My favourite scene from the film has to be when the children are on the tour of the factory and enter the chocolate room. Though Mr Wonka’s factory is filled with elaborate high-tec machines there is, in my opinion, nothing more exciting than seeing a chocolate river. Deee-licious!

9. The Chronicles of Narnia – Narnia
While I don’t like her much, I have to admit that Narnia does look pretty spectacular courtesy of the White Witch. In the wintery conditions gripping the UK at the moment, many comparisons have been drawn with Narnia. The moment Lucy leaves the wardrobe and enters Narnia is one of the most iconic moments in fiction. The crunch of the snow under foot, the chill in the air – these frostry traits are all Narniaesque.

8. Pirates of the Caribbean – Tortuga
Yo ho, yo ho, a pirate’s life for me! Tortuga looks fantastic: it is the archetypal pirate island with its wenches, bar brawls and palm trees. I’m not sure whether I’d like to live there – it may be just a little dangerous – but it would be rather fun to take a holiday there. Perhaps Tortuga is one of the excursions available on the Black Pearl Cruise?

7. Alice in Wonderland – Red Castle, White Castle
One is a baroque masterpiece with perfectly pruned hedges while the other is a vision in white with rows of cherry blossom trees. If I ended up in Underland, I’m not sure which one I’d rather live in. Presuming the previous occupants have vacated the properties – let’s face it they’d both be pretty loopy housemates – I think the White Castle just takes the edge. With its stone pillars and big open spaces, the White Castle has a certain elegance.

6. Star Wars: Episode I, II and III – Naboo
Naboo reminds me of No 4 on my list. While the lovey-dovey Anakin-Padme stuff was going on in the foreground, I was admiring the beautiful scenery in the background. Remember Anakin and Padme sitting in the meadow giggling and chatting? No? You were probably too busy admiring the tall grasses and giant waterfalls like I was. Love O – Scenery 1.

5. Jurassic Park
I’m not silly – well, maybe a little bit – so my version of a jurassic park would have fully working electric fences and I would be the only one with access to the security system. No way are my fences going to deactivate so little Tyranny R can find a tasty snack. Jurassic Park is one of my favourite films and I think that the special effects have stood the test of time; they still look great today.

4. Avatar – Pandora
Ahh, luscious, beautiful Pandora. Say what you want about the Na’vi who inhabit it, but I think Pandora looks stunning. One of the things that struck me about Avatar was how amazing Pandora looked. With its unspoilt beauty, it looked like a rainforest on steroids. The array of colours, the massive waterfalls, the bizarre wildlife – everything is taken to the extreme and the results looks great.

3. Lord of the Rings: Fellowship of the Ring – Hobbiton
Hobbit holes. Pure and simple. Hobbits must be the most eco-conscious of all Tolkien’s creations. Not only do they live in environmentally-friendly homes but they also love gardening and do very little travelling. If they do fancy a stroll, they simply walk with their fantastically furry feet. I love hobbits. In hobbits Tolkien created a peaceful, charming race with terrific personalities. Their homes are terrific, too.

2. Harry Potter – Hogsmeade, Diagon Alley
Honeydukes Sweetshop, Florean Fortescue’s Ice Cream Parlour, Ollivanders – need I say more? These shops, and the others that make up Hogsmeade and Diagon Alley, sounded amazing when I read the Harry Potter series and when I saw the film they all lived up to my expectations. I could quite happily spend a few hours milling around Hogsmeade and Diagon Alley and I think a nice, warm butterbeer from The Three Broomsticks would round off my trip nicely.

1. Lord of the Rings: Fellowship of the Ring – Lothlórien
Reportedly the most beautiful place on Middle-earth, Lothlórien is home to Celeborn and Galadriel. The architecture of the elves (rather, the beauty of Tolkien’s imagination) created an idyllic, otherwordly haven for the elves.

One of my favourite scenes from The Fellowship of the Ring is when the fellowship, minus Gandalf, arrives at Lothlórien. The camera zooms out and reveals a magical setting: the trees are illuminated with intricate arches and pathways twisting around them. Just as the hobbit holes reflect the hobbits’ homely personalities, Lothlórien encapsulates the elves’ elegance and ethereal nature.